Outside the open window, the sky was blue. And the air smelled fresh.
Shades pulled wide, sun streamed through, warming the cozy little bed. A small form dozed in the shine, her after-breakfast nap having gone a little long. She stirred, rolled - this way, then that.
And promptly tumbled off the side.
Twisting by second nature, she hit the plush carpet neatly on both hands and knees. Yawning, she turned to greet the day, loving the light but rueful of the day.
The clouds were white and fluffy. They lazily moved around her shoulders as she wrapped them around her, and a few vanished as she pulled a long mane of orchid colored hair out from beneath them.
It was time to go out. 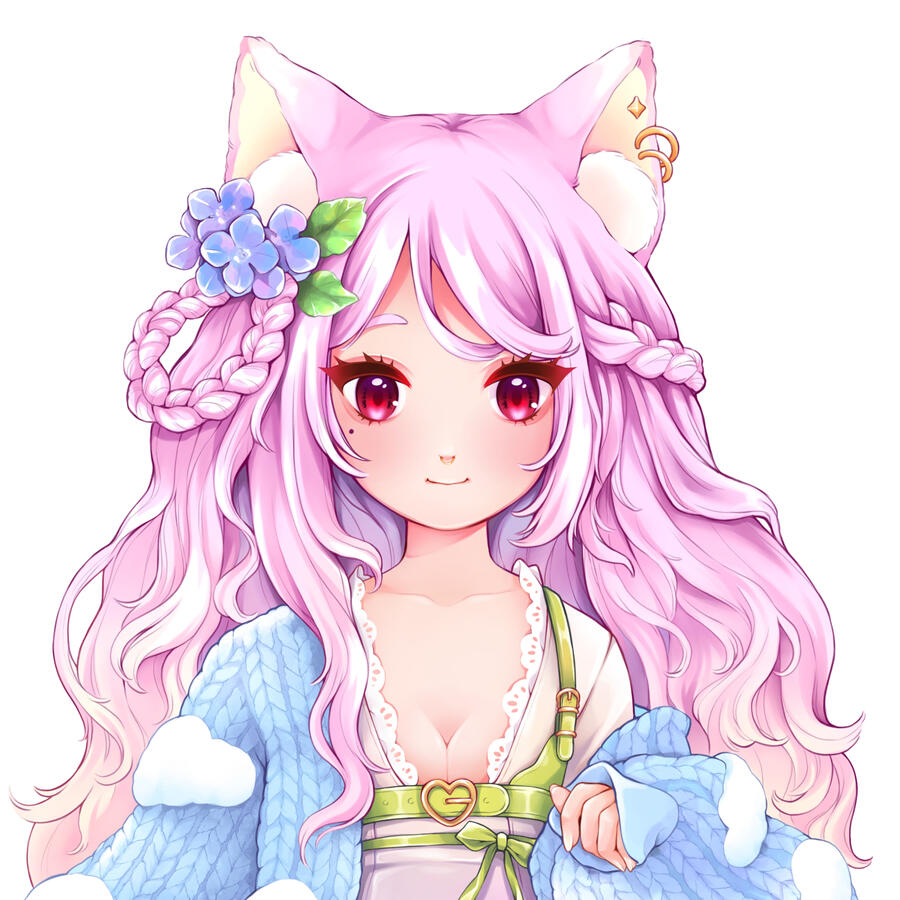 Her large, triangular ears flicked, irritated. The muffled music permeating the walls had an unwelcome guest vocalist.
It sounded like the neighbor lady was going through a break up.
Music, she had heard, soothed the savage beast. She wasn’t sure about this situation, though.
She cinched her belt with its little gold heart clasp, drawing in the waist of her pale pink smock dress, and drew the sky colored sweater in around herself. Her neighbor was now singing well over the volume of the recorded tracks.
It was now definitely time to go out.

The local coffee shop was about a seven minute walk from her new home, but her pace took her ten. She still considered the place she was in to be ‘new’, but the truth was, she merely had yet to discover it.
Her steps were small. Her tail flicked thoughtfully. Her eyes played over the unfamiliar houses along the road. How many times must she have seen them by now?
But never really seen them.The neighborhood gave way to Main Street. She gripped the strap of her shoulder bag tightly for its familiarity. A few more feet and she’d reached the cafe, just as the internet had promised her. Always lost in thought, she’d never remembered the way, even though it wasn’t very far.The place was dark in design, almost all surfaces composed of deep toned wood, but bright by nature, the friendly afternoon sun poured in the front windows at a comfortable angle for illumination but not over exposure. The menu was across several suspended chalkboards behind the counter and ranged from dark roasts to light and fruity.She approached the counter. A barista she didn’t recognize waited, expectantly.
“Hibiscus tea, please.”
The girl behind the counter punched in her order.
“Oh wait. Can you make it with the passion fruit lemonade as the base?”
The girl behind the counter clicked her tongue and tapped the register again. “Will there be anything else?”
“I’m sorry… is that order too strange?”
“You think that’s weird?”
“I… don’t know. Maybe.”
“Girl, that’s not even the weirdest order this morning. Name?”
“Primrose,” she said. “Rose. And you?”
“Becca,” replied the barista. “But it’s just, you know, for your order.”
“Oh…” Prim’s cheeks felt warm. “Sorry, right.”
“I’ll call you when it’s ready.”
“Thank you.” Rose wandered along the dark wood counter, past the intricate coffee machines, to the pick up spot.

“Nice purse.”
“Thanks,” she chirped brightly, surprised. Prim turned to see where the voice had come from. There was a young man standing behind her, upright with all of the rigidity of an untoasted sandwich, hair unkempt, whiskers drooping lazily, hands in pockets. He raised his gaze from her bag to her face.
“The patches, pretty cool.”
“Yeah!” she agreed, unsure of where this was going.
He smirked. “You don’t even know what they mean, do you. Probably just picked them because they looked cool.”
“They do look cool,” replied Prim. “And I do know what they mean. I picked them myself. This one is my favorite game company.” She pointed to a stylized punching hand. “And this one is one of my favorite games.” She pointed to an abstracted V shape.
“Your favorite? Or your favorite to watch your boyfriend play?”
“I don’t–” Prim stopped and frowned. “What’s your deal, dude?”
He smiled the way a hyena might grin at its prey. “I can spot fake gamer girls from a mile away.”
Prim’s eyes went wide. Her mouth dropped open faster than she could hold it shut.
“Don’t even know what to say? I’m not surprised. Facing the truth can be harsh.” He regarded her. “I bet you can’t even name three Agents.”“Rose!” Becca’s voice snapped both of them out of their glaring match. “Order for Rose.”The stranger sniffed, looking past Prim’s head. “Of course. It’s pink. For Rose.” She did not like the way he said her name. It oozed. Frowning, Prim turned and collected her drink, but then she set it down again. She snatched up a napkin and turned back to the stranger.
He looked unimpressed.
Reaching into her heavily adorned satchel she produced a pink colored pen.
“I didn’t even ask for your number,” he said, looking down at her scratching at the napkin.
A cloud passed in front of the sun. The coffee shop became like dusk.
Prim presented her antagonist with the scrap of paper. He looked down at it.

“What’s this?”
“It’s me. Across all of the major accounts. Put up. Or shut up.” He looked at her. Her expression had gone completely flat and her ears were back against her head. It was his turn to be at a loss for words. “Might want to schedule an eye exam while you’re at it.”
“What — what are you talking about?”
“You said you can spot a fake gamer girl from a mile away,” she said, picking up her drink and stabbing a straw through the lid. “Sounds like you need your vision checked.” She sipped, glaring at him.Prim didn’t break her stare, he faltered first.
“Astor!” called out Becca.
“Y-yeah,” said the stranger, weakly. “Here.”
“Sorry, I dropped your drink in the trash. It’s gonna be a few more minutes.”Prim put a five in the tip jar and brushed past Astor as she left. At the door, she hazarded one look back. He was still staring at the counter, rubbing at an ear with the side of his hand.
His tail was puffed up like a duster.

The sun was shining again as Prim left the coffee shop.
She raised her drink to meet her mouth, lifting it higher than usual as her chin was held high. She sipped. It tasted extra sweet.
“What a jerk,” she thought, wandering down the sidewalk. “I sure showed him. Fake gamer girl my ass.”
The trees lining the street were in bloom. She smelled the potent scent of summer time. It smelled like victory.
“I sure showed him,” she murmured to herself. But her pace started to slow down.
The clouds moved along with a little less bounce.
The clomp of her thick soled shoes softened on the sidewalk.
“I showed him…” she said. A stray blob of bitter pulp snuck up the straw. Prim swallowed. “I showed… him… all of my social media accounts.”The door to the coffee shop exploded open. The jaunty little bell clattered to the floor. Becca turned abruptly from the frother to see what was going on, milk foam spraying everywhere. The door frame was filled with the silhouette of a little, panting, pink cat girl.
“Is he still here?” she squeaked.
“The guy you utterly wrecked?” asked Bec, wiping down the counter. “No, I assume he called an Uber to the hospital after that smack down you gave him. Why? Did you want to go for round two?”
“N…no,” said Prim, shuffling her feet across the shop back to the counter. “Becca what did I do? He’s gonna come find me! People on the internet are scary!”
Becca tucked her chin, looking down at Prim. “What happened to all of that yas queen slay from a couple minutes ago?”
“Crowns are really heavy and uncomfortable,” whimpered Prim.
Becca sighed. She looked around. Then she looked down at Prim’s bag. Prim just stared off somewhere a thousand meters away.
“So. What rank are you.”
“Gold 1…” sniffed Prim. “This season.”
“Pretty sure you’re better than he is.”
“How do you know?” asked Prim, finally looking up at her from the counter top.Becca adjusted her glasses and gazed out the front window. “Dude is a gamer, but he’s strictly mid tier. He’s in here with his friends all the time, they’re always talking about games but never any strategy. They rag on him all the time for not being a team player.” Becca picked up a cup and turned her hand at a strange angle, presenting it to Prim. “He’s got big thumbs but skinny fingers, I noticed them when he picks up drinks, so he’s probably mostly a console gamer. Whereas you have cute nails, very cute by the way, but you keep them short, so you’re probably a mouse and keyboard player. You’ve got a precision advantage. And he’s always wasting time in a coffee shop, so odds are he’s not getting as much practice as you are. You don’t get to Gold rank in anything by button mashing, but he talks a big game so he’s pro-o-obably gonna come at you. But when you do, you’re gonna be ready. And you’re gonna kick his ass. And you’re gonna do it live streaming on Twitch.”
Prim’s eyes were wide, staggered by Becca’s unexpected insights. They stared at each other for a moment.

Primrose
Love, beauty, passionAlastor
TormentorBecca
ModeratorAdmittedly, Primrose does not produce thorns, but Roses do
Most computers and game consoles run 64-bit CPUs
x86 is the base instruction set used in those processors
Eighty Six also means “to get rid of”